Geology at a Birthday Party 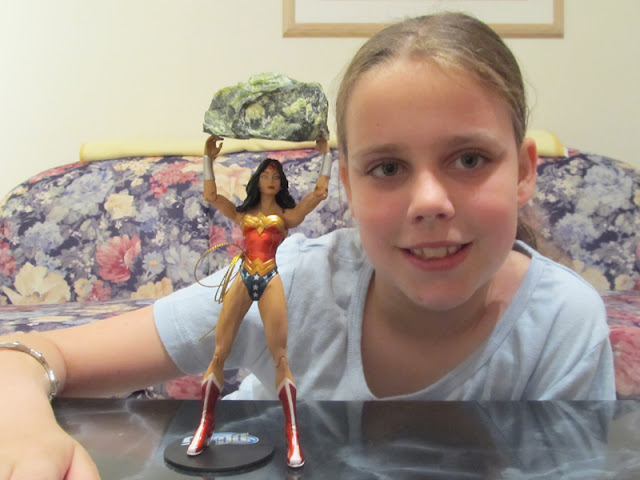 My niece recently had her 10th birthday, and I felt it fitting to add to her burgeoning rock & mineral collection with some flint, chert, and serpentine. I mentioned the properties of serpentine to her, and its connection to asbestos, which is a carcinogen. She must have forgotten the part where I mentioned there is no chance of inhaling carcinogenic asbestos from the fist-sized rock I gave her unless she grinded it into a fine mist, nor does it have the mass of chrysotile needed to make her lungs even notice. But lo and behold a few hours later she had placed a paper on top of her rock box ..."Warning - Cancer rock inside".

An opportunity to educate her on the properties of minerals, and she took to it. Kids get right away that rocks are essentially a collection of minerals in different ratios. I'm amazed at how easy it is for kids to quickly grasp many things geological; Sometimes I wish I had such a malleable mind when I'm engulfed in my university studies. Specific gravity/density is a hard one to explain, but streak powder, cleavage, fracture, hardness, were all easy to demonstrate given that visual demonstration of them is straightforward. If you try this, I would recommend not using the mirror example for hardness, as some kids might run off to try it on bathroom mirrors.

Later on after her party, we sat down to watch some old Simpsons episodes on TV, and Treehouse of Horror V was what was showing. Homer invented a time machine by modifying a toaster, and it catapulted him back to what appeared to be a blend of the Paleozoic and Mesozoic eras, and even some Neogene (a Megatherium alongside a T-Rex??). His father gave him sage advice about not touching anything in the past, as doing so could alter the future in ways he couldn't possibly imagine. Homer was chased by a T-Rex, eventually escaping. Unfortunately, upon sitting down for a rest, he squashed what is considered the first land-walking animal. I speak of the Eusthenopteron:
Homer killed the terrestrial evolutionary process! For some reason, that lead to the human race being 50-feet tall giants. Wouldn't it lead to us remaining aquatic animals?? Why am I trying to find evolutionary logic from a late-night cartoon? Meh, I was just pleased to see these archaic lifeforms I'm familiar with used for satire.

Such a nice post about Geology at a Birthday Party. Everything sounds amazing. My daughter will turn 16 soon and I am literally very confused about her party theme. Want to make her surprise by hosting an outdoor party at one of the rental spaces for parties in LA. Can anyone here provide any theme inspirations?