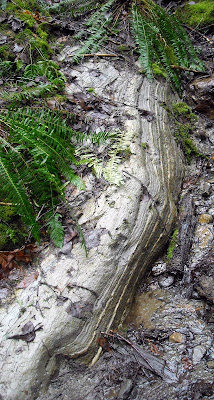 The newest pair of field photos are quite local to me, as they are a slice of glaciomarine layer cake left over from the last waxing of the Cordilleran ice sheet, specifically the Wisconsonian. The following pair show exposures of a glaciomarine clay unit sandwiched in-between granite bodies and Holocene soil & sediment, found within North Vancouver's uplands. What you'll see are portions of the Capilano Sediments member of the Sumas Drift group formed in the Quaternary.

The first photo (at right) is a classic exposure within the Capilano Canyon park & suspension bridge (49° 21.470'N 123° 06.698'W). You'll notice the beige coloring of clay that is packed into mud; this unit is quite distinct from surrounding Holocene soil, the greenery, and the granodiorite bedrock. It has a very smooth consistency, and upon scrutiny has micro-level faults from minor stresses placed on it. The layer dips a good 10-12º to the SE, with a NE-SW strike.

The foliage around the site is quite dense, even in the winter. Biomass detritus litters the photo, which was taken in the late winter months. This Pleistocene marine clay was formed at the front of valley glacier lobes stemming from the Cordilleran ice sheet. The continental slope at the front was relatively high, so deep sea marine deposition was not dozens of kilometers from the glacial terminus, but rather a few kilometers. Post-Pleistocene isostatic rebound was quick in the region, and it elevated this layer to at least 50m asl, and in some areas up to a few hundred meters. Post Eocene tectonic uplift of the coast mountains caused the northern edge of these types of sedimentary units to be gently warped upwards to the north and draped over the lower slopes of the older rocks of the north shore mountains. 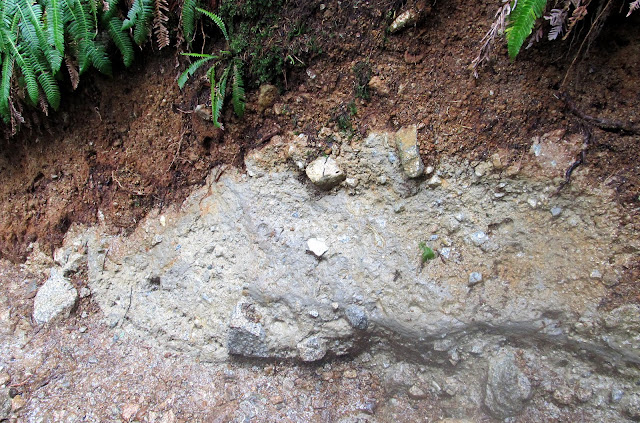 This exposure of the same member is found along the Lynn Peak trail (49° 21.735'N 123° 01.519'W), about a quarter of the way up, roughly 300m asl. This portion is mantled by Holocene soil, and surrounded by a lot of till and colluvium. This particular photo shows the most distinct boundary surface between the clay and surrounding members. It is likely a lens of material formed during episodic activity (see link on Surficial and Bedrock geology). The continuity of the glaciomarine member is hard to follow along the north shore, as it is buried under steepland sediments, landslide debris, and thick vegetation. So spotting a slice of the cake is considered good luck for intrepid geological explorers.

I stumbled upon your blog today and have really enjoyed your posts. I hope you have not abandoned it!