Columbia Basin Trip: Day 1 - a Lahar and an Anticline 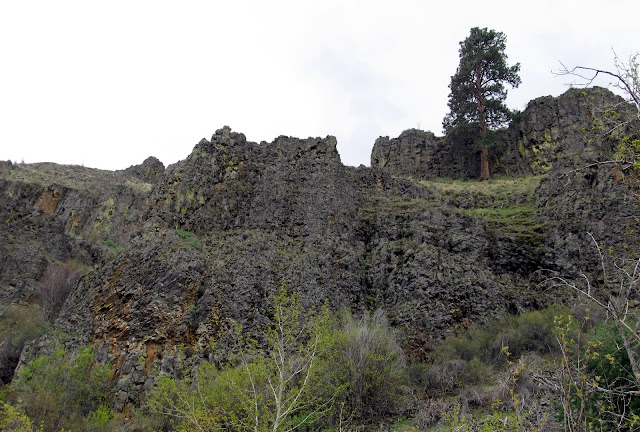 Only now at the end of April do I have a moment to breath, as two tough terms that went by like a blur have come to their inevitable summer conclusion, and the search for work placement begins. But before the hunt begins, a getaway for a few days was what my figurative spirit called for. I'm the outdoors type (is any geoscience type not?), thus I'm allergic to staying indoors when I have some time off. After perusing through Ellen Morris Bishop's Hiking Oregon's Geology book, I was inspired to try out some of the listed hikes. The trip I took along the Columbia River Gorge was astoundingly beautiful, and the forces of nature were out to make it an interesting few days. 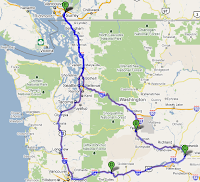 After a few hours driving, the first stop was an aside from I90-East, to visit the roadcut that exposes the Ellensburg Formation lahars (N 47° 06.041 W 120° 41.705). Driving along the windy stretches of central Washington, this slice of roadside geology was quite the treat. The lahar members of the formation stick out quite noticeably from among the semi-arid grass veneer over basaltic lava flows typical of the CRBG region. This lahar exposure, resulting from a muddy mix of water with pyroclastics & ash originating 50km away, is but one example of over a dozen such deposits which have been discovered around Kittitas and Yakima counties.

This particular Miocene lahar deposit has some unique features, including an erratic conglomerate boulder that was carried by the great erosive force,  and a plethora of broken-up crossbeds. This is typical of the stratigraphy of lahar deposition, which generally includes a bottom layer of eroded country material, followed by the bulk lahar layer composed of grains ranging from silt - boulder size, and finally the top layer of mostly sand with interbedded bits of gravel & pebbles arranged in a disarray of swooping crossbeds, indicative of a highly turbulent current during deposition. When scrutinizing the roadcut, I could feel the sandy texture, and noticed various discontinuous crossbed forms. The granules were mostly hornblende, feldspar, and some distinct pink Ca pyroxene minerals. 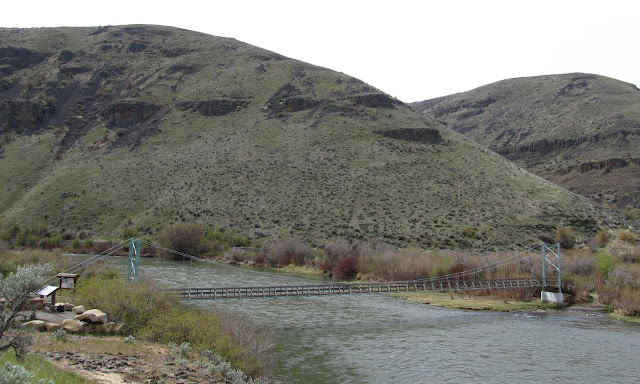 Shortly after the stop at the lahar was the first hike on the trip, and it turned out to be one of the best hikes I've had in a long time. This is BBC → Beautiful Basalt Country. A tributary creek of the Yakima River canyon, called the Umtanum, has a never-ending trail that takes hikers through a varied landscape of exotic vegetation, eclectic creatures, and fantastical basalt shapes. Obviously I focused on the latter, but tried my best to frame shots to include the colorful blooming trees and the out-of-sync redwoods I spotted. The basalt exposures became more plentiful and protruding the further I hiked in, to the point where I could see plenty of examples of entablature, pillow, and columnar basalt all within a small radius. The multiple flood basalt lava flows of the CRBG that effused throughout the Neogene gave the Umtanum creek canyon its layered characteristics, with varied thicknesses and formational conditions combining to define the Yakima Basalts you would see there.

On my way out, a last pullover harkened to me, maybe because my GPSr kept bleeping at me that an earthcache was nearby. Lo and behold a small monument to plate tectonics + fluvial processes in geomorphology. What did it say? To frame it geologically: The Yakima Basalts and Ellensburg Formation lava flows are quite thick, on the order of a few kilometers, and fluvial downcutting into them still has a ways to go (core drilling down 3 km's still hadn't reached a different basement lithology). On top of that thickness, folding into anticlines & synclines occurred due to north-south trending compression. One particular anticline, the Umtanum ridge anticline, is noticeable if you have a good eye for the big picture. It stretches for over 80km, and with such a large scale and broad sweep it might be hard to notice the bend that defines the anticline.

Due to the slow warping matching the slow downcutting of the Yakima river, the river has cut its course through the basaltic layers and created a water gap. The river retained most of its sinuosity whilst doing so, spending its erosive force cutting through the basalt rather than cutting a straighter channel as the gradient increased. Another great earthcache with lots of information and excellent diagrams provided by local organizations, in this case the Washington State Parks and Recreation Commission.

There were other interesting stops along the routes and highways, where roadcuts exposed features and structures that demanded scrutiny. I saw no less than several examples of tilting, faulting, and various forms of basalt in numerous shapes that would make cumulus clouds envious. The vegetation of the Umatilla Plateau & Yakima Folds ecoregions gave a splash of variety & color in springtime that is quite unique and unparalleled. The next day took me into new and interesting places, more CRBG but in different flavors. Day 2 post to follow...

Learning from the gentry: Maars and Tuff Rings

Uni classes that specialize in intermediate - advanced volcanism are few & far between in my neck of the woods. Prior to the 4th year courses that dive into rheological properties of magmas and lavas, detailed structures of volcanic landforms, eruption dynamics, and mechanics of volcaniclastic deposition (at least according to the course outline), us undergrads get treated to repetitions of the usual volcanology basics as it pertains to other geoscience disciplines. It gets a bit tiresome going over the VEI for the umpteenth time, and retreads about the same types of volcanoes erupting the same types of lava. Variations within a single volcano don't exist before 4th year, and probing questions are usually met with the full-stop response "But for this course you only need to know...".

So I've had to teach myself some ins and outs of volcanism to go beyond the basics. The Firefly guide was a good start, and had more in-depth technical detail than I expected. After looking at some sites in the High Lava Plains of Oregon, I became familiar with features called maars and tuff rings. Courtesy of Jessica Ball, I was pointed in the direction of certain papers written by Volker Lorenz, most notably on "Maar-Diatreme Volcanoes, their Formation, and their Setting in Hard-rock or Soft-rock Environments". It's an excellent read, and lays out the details of these structures as seen in varying locations, plus methods of emplacement during different periods of volcanism. Magma's interaction with various types of aquifers, and how each can produce a different maar-diatreme cross-section is also outlined.

The features themselves might lean towards the esoteric, but when trying to find places of interest that can offer something new to digest whilst hiking around, maars and tuff rings fit right in with tuya's, obsidian flows, lava domes, and other under-appreciated volcanic gems of the landscape. Some of the interesting, more explicit facts I discerned from Lorenz's paper include:
Those points are my interpretation, and I might be off (at least until year 4). The only experience I have with maars and tuff rings is from a trip into south-central Oregon's Lake county. Unfortunately, it was several years ago, prior to my budding interest in the geosciences. However, Fort Rock and Hole-in-the-Ground are excellent stops for marvelling at a standout tuff ring and maar not 10km from each other. They are part of a basin of primarily Quaternary alluvium eroded & transported from the High Lava Plains province/Steen's basalt group. During their diatreme eruptions in the Pleistocene, they were inland lakes, hence their genesis.

The Chief of a thousand

The 1000th geocache is a milestone that calls for a significant effort to find a spectacular cache. I've never been up the Stawamus Chief's backside, and only once have I been up the sheer face when my rock climbing friend hauled my frightened self up that hard way. So up the back of the Chief it was decided, and one of the caches placed on the three peaks would do nicely as the milestone.
On Thursday I had an opening, during a lull in work/schoolwork, to finally get back to nature after 3 months of being sequestered from the intense parts of it. I'd not recommend doing the Chief hike as your first hike in a long while; my thighs are burning and my joints crackling after the 3km→ 600m↑. But I did enjoy myself immensely. The weather was perfectly clear, mild, and the trail had recent maintenance. It wasn't busy but it wasn't abandoned, and one bloke I had a chat with on the first peak was an expat from Darwin who is going to UBC to pursue a postgraduate in materials science (he mentioned to me a Mount Conner not far from Uluru). The caches themselves were easy to find, as the GPSr was on target all day long.
Going up such an icon of granite switches my eyes & mind into a geology mode. Up the trail there is little to see besides heavy vegetation and rock rubble. From pieces of the rubble, I spotted some mica schist, granulite, syenite, conglomerate of generally small grains, and of course granodiorite grading to granite or grading to diorite. Indeed a hodgepodge of igneous potatoes with a bit of high energy sedimentary gravy thrown in. One particular opening to the side of the trail halfway up was the home of an oddly placed erratic, which upon investigation appeared to be a 3 meter diameter colluvial boulder of the same lithology as the country rock.
This opening was also the first place to showcase the dominant process that is the hidden danger of the Chief trails → exfoliation. On the farside mountain rockface I could see indication of rockfalls via detachment, and further up the trail there was a couple extreme overhanging weathered blocks that I've termed "jenga granite" (see picture below). Glacial activity during the Pleistocene exploited cracks & joints formed via uplift and exfoliation of the granite family rocks making up the massif. Once the trail started heading straight up the ladders & chains, the general hiking boots were swapped for the rock scrambling shoes, and the surface of the true Chief was exposed to the heavens. The Chief is not exactly geologically spectacular along the top, as what you'll see is mostly weather-beaten granodiorite with splotches of diorite & granulite xenoliths up to beachball sizes. The real treat is the views of Howe Sound, the ant-colony of Squamish, and the snowbound Mount Garibaldi complex. The icing on the cake was not dying on the way down the steep center peak, and not sustaining any injuries after an absence from strenuous hiking. Heading into town afterwards for some goods & services was a perfect time to marvel at the sheer granite rockface that looms over Squamish. A keen eye will spot the darker 'slash' that turned Stawamus Chief from a monolith into a bilith 30 Ma ago.

Now that I've hit 1000 I'm a veteran of the hobby, and over the two years I've hunted for those little plastic containers, I've developed some likes and dislikes about it. Thus my forthgoing geocaching focus will lean towards earthcaches plus interesting backwoods/backcountry hikes, and not bothering so much with urban micros and tourist traps.