Uluru is a sandstone gem of Australia's interior landscape. It rises off the plain as a formidable inselberg of rusty red solitude. It's what comes to mind about the Australian countryside for many non-Australians, whether as the Anangu name or the anglicized 'Ayers Rock'. Savvy geologists, physiographers, and locals, however, will know about the lesser known gem of conglomerate rock domes not 30 kilometers to the west of Uluru. The Olgas, known as Kata Tjuta in the Anangu language, are a collection of 36 conglomerate rock domes rising off the plain to various heights. The highest is Mount Olga, with a prominence of 546m.

Kata Tjuta is part of the same stratigraphic formation as Uluru (see diagram at right), a unit of arkosic sandstone derived from Cambrian alluvial fan deposits of sediment that were buried and lithified over deep time. The difference in shape & topography between the two is due to the structurally weaker conglomerate of the Olgas (the Mount Currie Conglomerate) being exploited by folding, faulting, and subsequent hydrologic weathering & erosion. The conglomerate matrix is comprised of granodiorite, basalt, gneiss, and fine sand as the cementing material. Essentially, Uluru is the tougher end of the layer, though it does not lack features created from weathering such as pits and tafoni-based honeycomb surfaces (indicative of Mediterranean paleoclimates). Even though the conglomerate lithology of Kata Tjuta lacks the feldspar mineral content that Uluru has, fractured blocks were exploited, making the initial mass structurally weaker, even though it is mineralogically stronger. Both ends started out as a large singular massive block, but Cenozoic Australian climates have taken a greater toll on the Olgas for the reasons stated.

Back in the Neoproterozoic, the Petermann mountain range was more formidable than it is today, due in major part to the Petermann orogeny. However, the Neoproterozoic/early Paleozoic climate was more temperate, so its peaks were being denuded by precipitation at a greater rate than the more subdued Holocene landscape is by current aeolian forces. Alluvial fans were created along the flanks of the Petermann foothills, each differing slightly in lithology, but not in origin. These fans formed a piedmont range that was a major part of Petermann foreland basins, such as the Amadeus, Georgina, Ngalia, and Officer basins of then central Australia. The fan material developed sequentially into flysch once a eustatic change in sea level occurred in the late Cambrian, covering the region in a shallow sea. Continuing weight of added sediment + the weight of the increasingly deepening sea was enough pressure to lithify the alluvial fans/flysch into arkosic sandstone (Uluru) & conglomerate (Kata Tjuta), each portion representing a different fan thus a slightly different lithology, all connected together during the melding of adjacent sedimentary units. If we could remove the overburden of sand & schist members, we likely could find the area where the conglomerate and sandstone grade into each other.
Australia was quite geomorphically active during the Paleozoic; a contrast to the quiet old continent of today where relief and rates of denudation are comparatively low, and atmospheric hazards dominate. After the transgression of the early Paleozoic, the sea receded and orogenic activity took over in the Devonian, thrusting and folding and faulting Central Australia, to the point that the Mount Currie Conglomerate formation folded with surrounding units into a distinct syncline. The Late Paleozoic – Mesozoic – Tertiary periods began a slow march of weathering & erosion of overburden, until the exposure of the ends of the Mount Currie Conglomerate finally revealed a more resistant rock. Exposure to the atmosphere is estimated to have occurred during the Jurassic. A basin between Uluru and Kata Tjuta collected aeolian sands and dunes throughout the Quaternary, thus planing the region through depositional mechanisms. All that stood out in the plain were the tips of rocks derived from a resistant lithology. The rock domes of Kata Tjuta specifically dip 10-20º with a SW-NE strike. 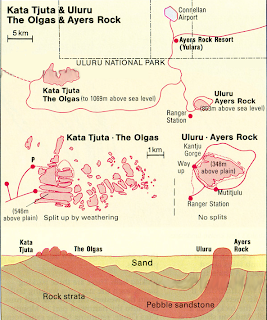 The finer features of the Olgas have been primarily shaped by precipitation during more temperate paleoclimatic conditions. Freeze-thaw processes acted on joints in the rock, fracturing the surface. Rivulets of creeks and small waterfalls promoted the formation of potholes and gorges. Since granite is a primary ingredient in the Kata Tjuta Mount Currie conglomerate, spheroidal weathering was able to smooth and accentuate a rounded dome shape to the remaining 36 mini-bornhardts by working on the angles & corners. Of course, iron content exposed to the atmosphere colored the veneer of Kata Tjuta to that typical iron oxide rusty-red. Some visible structures noticeable when perusing the rocks include limited tafoni structures among the rock domes. Slickensides are also apparent, indicating displacement of large sheets of the conglomerate during times of acute mass wasting.

As an aside, I stumbled upon an interesting take on the formation of Kata Tjuta when google-searching: Tas Walker's Noachian interpretation of Kata Tjuta. It is a prime example of working backwards with the scientific method, where a proposed theory is the starting point, and evidence to support it is anecdotally surmised to fit that theory. Remember, if a null hypothesis cannot be rejected, and credibility cannot be established through peer review, it is not science, and certainly not geomorphology science. Current [accredited] geomorphology research reveals noticeable increase in relief amplitude of both Uluru and Kata Tjuta inselbergs throughout the Cenozoic, which is atypical of the ideal cycle of erosion (see additional links). Interesting mechanisms must be at play, and a deeper look into the asthenosphere, lithospheric flexure, and the mass dynamics between the overburden and the Mount Currie Conglomerate are called for.