Papers I'm reading: Trends in the timing and magnitude of floods in Canada

In case anyone hasn't noticed, Canada is huge. The country's vast area and varied topography lends itself to a multitude of different hydrological regimes, influenced atmospherically on a meso-macro scale by Polar & Tropical air masses. The warm vs cold air mass war has its battleground across the latitudes of Canada, from 42° - 66.6°N, with the only region that can be called "calm" being the ice-capped tundra islands north of the Arctic Circle. Very few places in Canada do not receive decent snowfall, so spring freshet runoff from snowpack melt is typical, and measuring it is every Canadian fluvial hydrologists nitty-gritty.

Climate change towards a warming trend must have an impact on the various hydrological regimes and how the hydrologic cycle has been altered due to that impact. As I've said, there are a multitude of different hydrological regimes, so there are likely a multitude of different trends. This line of thought brought me to an academic paper in the Journal of Hydrology that reviews trends in timing & magnitude of floods in Canada due to hydrologic shifts, and does so by looking at the established physiographic regions of Canada. Juraj Cunderlik and Taha Ouarda from the Natural Sciences and Engineering Research Council of Canada Chair on Statistical Hydrology analyzed flood data gathered from several dozen strategically placed monitoring stations throughout the hydrometric network of Canada.


This study investigates trends in the timing and magnitude of seasonal maximum flood events across Canada. A new methodology for analyzing trends in the timing of flood events is developed that takes into account the directional character and multi-modality of flood occurrences. The methodology transforms the directional series of flood occurrences into new series by defining a new location of the origin. A test of flood seasonality (multi-modality) is then applied to identify dominant flood seasons. Floods from the dominant seasons are analyzed separately by a seasonal trend analysis. The Mann–Kendall test in conjunction with the method of pre-whitening is used in the trend analysis. Over 160 streamflow records from one common observation period are analyzed in watersheds with relatively pristine and stable land-use conditions. The results show weak signals of climate variability and/or change present in the timing of floods in Canada during the last three decades. Most of the significant trends in the timing of spring snowmelt floods are negative trends (earlier flood occurrence) found in the southern part of Canada. There are no significant trends identified in the timing of fall rainfall floods. However, the significance of the fall, rainfall-dominated flood season has been increasing in several analyzed watersheds. This may indicate increasing intensity of rainfall events during the recent years. Trends in the magnitude of floods are more pronounced than the trends in the timing of floods. Almost one fifth of all the analyzed stations show significant trends in the magnitude of snowmelt floods. Most of the significant trends are negative trends, suggesting decreasing magnitudes of snowmelt floods in Canada over the last three decades. Significant negative trends are found particularly in southern Ontario, northern Saskatchewan, Alberta and British Columbia. There are no significant trends in the magnitude of rainfall floods found in the analyzed streamflow records. The results support the outcomes of previous streamflow trend studies conducted in Canada.

What did they find? (delving into the abstract's details) 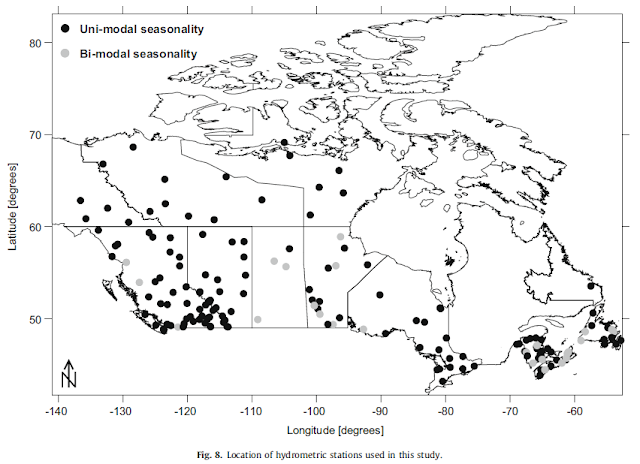 I'm not going to detail their establishment of a statistical methodology to gauge multi-modal flooding seasons, as I'm more interested in the findings about floods in the country (statistical know-how is something I'm lacking, soon to be remedied). In terms of timing trends, readings in southern Canada over the last generation are showing a trend towards earlier spring melt floods. This trend is particularly acute in southern Ontario, Alberta, and BC. Changes in freshwater ice break/freeze up spring dates are strongly linked to large-scale atmospheric and oceanic oscillations, with positive feedback mechanisms as the driving force. Only 16 stations, which is 10% of those included in the study, had a statistically significant trend in the timing of spring freshet floods during the last generation. Of those 16, 14 had a negative trend pointing to earlier occurrence. Only 2 stations had a positive trend pointing to later occurrence of spring floods, and those were in the tundra of Nunavut. 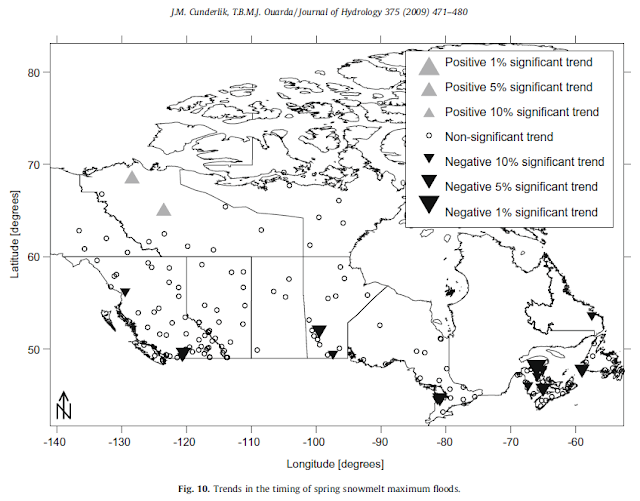 The real crux of the study is the findings about the change in flood magnitudes, as the values associated with volume/discharge are more striking than the shifts in the timing of said discharge. There is only a weak trend in having earlier melt runoffs, but a more significant trend in having a lower magnitude of those melt runoffs. The trend shows decreasing streamflow in heavily glaciated areas (ie. alpine glaciers of Rockies, valley glaciers of sub-Arctic & western Cordillera) during the typical spring runoff season for those areas of April - July. On average, the mean annual spring maximum flows have decreased by approximately 1% per year over the analyzed period of 1974 - 2003. My home province of BC had some intriguing findings: there was some significant increasing trends in spring maximum flows (increased snowmelt-induced flows) and significant decreasing trends at the beginning of summer (reduced snowmelt-induced flows); this is essentially showing that the snowpack is melting at a greater pace earlier in the season, leaving the summer months less supplied with meltwater from the snowpack. This is not a good trend as that scenario exacerbates drought conditions typical of BC in the summer, when a persistent Pacific High settles over the region. Indeed the paper finds that accompanying climate data (air temps) are shifting at a quicker-than-anticipated pace from the coldest to the warmest season, causing greater flow spikes in response. 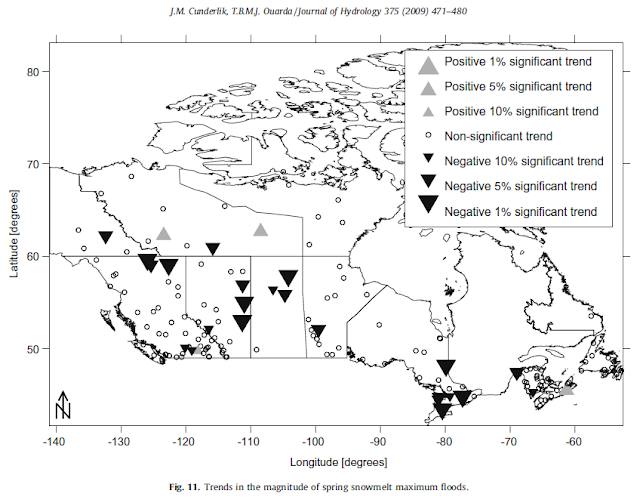 You mentioned "bimodal". What about the fall rainfall season trends?
Almost a non-issue amongst the observed data. The authors note only a potential for increasing rainfall during the fall season, as certain regions recorded occasional above-average spikes in fall rainfall in the last decade. Further accumulation of data throughout the coming years will shed light on the significance of the rainfall floods, and trends in their timing & magnitude. I should note that not all physiographic regions in Canada that have bimodality have the second, lesser, rainfall-induced one in the autumn months. Rather, some regions, most notably the prairie provinces, have the rainfall-induced flooding in the summer months due to convective storms.

What are the take-home messages?

There are many implications for the decreasing snowpack melt, and how it interacts with certain biogeochemical cycles. Particular regions of Canada rely on the spring melt to supply freshwater, and in BC, hydroelectric power will be adversely affected by a decrease in discharge at certain expected intervals. You've likely seen the news on how floods in Manitoba have adversely impacted populations living in flood plains there, but that has more to do with latitude, topography and a South - North sloping drainage basin (Anne Jefferson at Highly Allochthonous has a great post on the topic). Ongoing changes in the timing and magnitude of spring floods are not restricted to a particular flood seasonality type, but rather occur across Canada in different climatic and hydrologic regimes. Ultimately, the paper highlights that trends in the magnitude of floods are more pronounced than trends in the timing of floods, and the changes in magnitude are having a great impact among natural systems connected to the melting of the snowpack in the spring.

Thanks for this great paper analysis. Changes in the timing and magnitude of both floods and seasonal flows are going to present a major water resources issue in snowmelt-dependent regions in the very near future. (Hopefully I'll have a paper out in the next few months with more to say on the subject.)