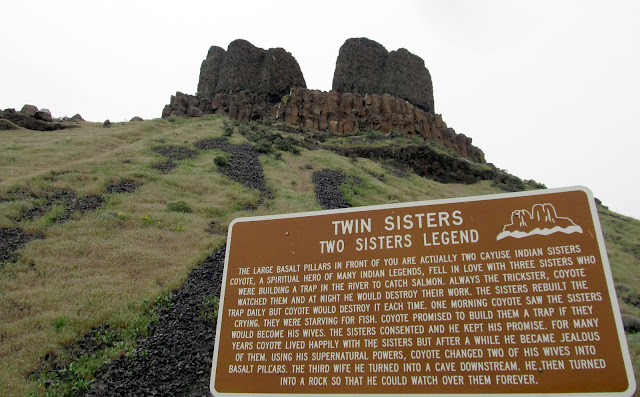 Looping around the Wallula Gap early the next morning, I made a stop at an interesting formation that at first makes me think 'volcanic plug'. Alas, the Twin Sisters are not so, but rather they are the erosion-resistant last vestiges of great flood basalts that covered this particular part of the Columbia Basin. The pillars, which are shaped like irregular molar teeth, consist of vertical remnants of pillow basalt atop a foundation of columnar basalt. Certainly there are other basalt forms in the Gap that also have bits of these remnants still standing, but the Sisters are the largest, most impressive, and least covered in vegetation. As you can see above, their interesting shape spurred native legends & provided some flavor to the geology.

Every geoscience geek with the smallest bit of knowledge of Pacific Northwest geology knows of the Glacial Lake Missoula floods and their offspring, the Channeled Scablands. The Wallula Gap, its numerous flood basalt flows, and the Twin Sisters themselves were all shaped by the late Pleistocene floods that ultimately found their outlet down the Columbia River. Akin to the Umtanum anticline mentioned on Day 1, compression of the basalt layers created an anticlinal ridge in the Wallula Gap area. An ancient river, precursor to the modern Columbia, slowly but surely cut a gorge through the layers as the gradient increased. Thus we had another water gap created thanks to the steady pace of uplift matching erosion. Of course, once the Missoula outburst floods began, tremendous volumes of water swept down towards the Gap where they were constricted, and thus erosive power was mostly focused on widening the Gap.

For those not familiar with the Scablands, their features & their origins: During the late Pleistocene, the Cordilleran ice sheet advanced into northern Idaho, Montana, and Washington. Gigantic ice dams were formed behind lobes of the continental glacier, holding back thousands of cubic kilometers of meltwater. When these dams broke, huge amounts of water were unleashed, following the path of least resistance through eastern & central Washington, constricting at the Wallula Gap, then funneling down the Columbia River, creating the Columbia River gorge. The last of the floods, called the Bretz flood, released 1600 km3 of water in a two-day period, inundating nearly the entire Channeled Scablands region, and even extended into the Willamette River valley south of Portland, before exiting into the Pacific near Astoria.
I lingered at the Twin Sisters for quite some time on the quiet weekday morning, and I wandered around looking at various perspectives of the palisade basalt, those exposures of basalt along ridges that make it look as if the area is fortified. Ahead of me was a long drive westward on the Columbia River interstate highway, made longer by tough crosswinds picking on my little Yaris. I didn't get to witness or scrutinize much more in terms of geology on Day 2, but the picturesque drive was superlative, and I did notice an interesting phenomenon about the Columbia river that tweaked my hydrologic bone...
Winds were gusting up to 70 kph, making it hard to open the car door, but I had to snap a photo of the waves on the Columbia going against the current. That's right, against the current, upstream, eastward. This isn't abnormal or against the laws of physics. All I can see as an observer is the surface of the river, and out of the two forces acting on the surface, the winds are winning...on the surface. Who knows how far down the water depth column the winning force becomes the downstream current? 3, 4, 5 feet, out of hundreds of feet? I couldn't exactly whip out a dingy and a current meter and head out into the frenzied waters, though I wish I could. In any case, interesting food for thought as I travel towards the multitude of high waterfalls that would be the 3rd day of my Columbia Basin trip.

BlueHost is ultimately the best web-hosting provider for any hosting services you need.