Columbia Basin Trip: Day 3 - McCall and a bunch of Falls 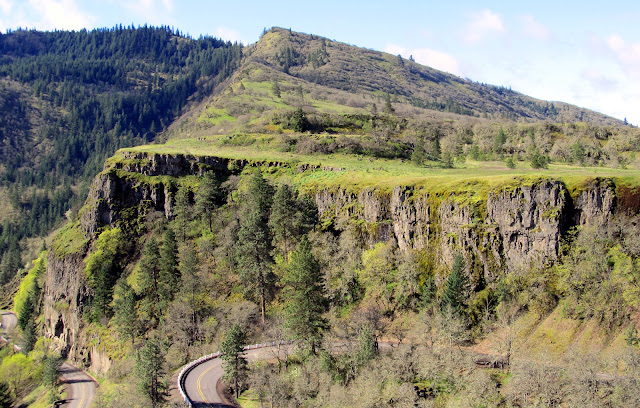 My third and final day out in Oregon included a spectacular hike through a nature preserve, and a drive along an historic highway where there is the greatest concentration of high waterfalls in the US. I lost count of how many waterfalls I saw, and recalling all their names is tough (Elowah, Oneonta, Multnomah, Horsetail, Ponytail, Latourell, Sheppard Dell, just to name a few). Each fall had its own character, in which the basalt rockfaces they flowed over varied in layering, formation, and vegetation.

But first, before the falls, it was time for a satisfying hike. Hiking Oregon's Geology guide book spoke of a 4-5 mile hike through a nature preserve just outside The Dalles (which I learned is pronounced "Dals", not "Dall-ehz"). Called the "Rowena Crest/Tom McCall Preserve", most of the geology relating to this hike is distant, observed by viewing the Columbia River gorge on the opposing Washington state side. Their side has the Ortley Pinnacles, fragments of basalt cemented together at a fault line. Mounds dotting the preserve's open stretches of grassland are erosional remnants of St. Helens ash deposits; they are more subdued and more sporadic than the infamous Mima Mounds, which may or may not have the same genesis. The real highlight of the hike is ecological, as at this point in springtime I could spot lupines, balsamroot, and blossom trees, and that was with my weaker-than-novice botanical background. The whole scene was very colorful at this time of year, and was capped off with sunny, turbulent weather.

The bulk of the geology in Day 3 came in the form of neverending pullovers and short, grinding switchbacks to view a multitude of waterfalls. This collection of falls was created when the Missoula floods cut away the gentle foothills of the flood basalts, leaving the cliffs and their creeks-turned-falls. If my recollection is correct, all but two of the falls I visited were of the plunge variety (Oneonta was Step-Pool, Sheppard Dell was tiered/fan). Discharge was excellent, fueled by mid-spring rains and freshet melt from peaks ranging from 1200-1600m elevation (see above cross-section).

Two particular falls were a real treat to behold: Multnomah & Latourell. The former is the highest in Oregon, second highest in the continental US, and technically is a hybrid of plunge/step-pool, with a higher and lower set of falls. Differential cooling rates of the various Columbia flood basalt lava flows (Grande Ronde Basalt) provided Multnomah with distinctive layering from top-bottom. I could make out entablature basalt layers (fast cooling, fractured into irregular blocks & joints), a pillow basalt layer (fastest cooling when exposed to water, forming rounded cobbles), and columnar basalt layers (slower cooling under entablature, forming slender hexagonal blocks) at the very top and interspersed near the bottom behind the rockfall scarp. Multnomah Falls splashwater erodes softer layers of rock below & behind the falls, creating a plunge poll and amphitheater semi-cave. The higher falls recede upstream faster than the lower falls due to weaknesses in their lowest basalt layers. Large pieces of basalt rockface have historically been calved off, including a 400 ton piece falling into the plunge pool and drenching a wedding party 15 years ago. 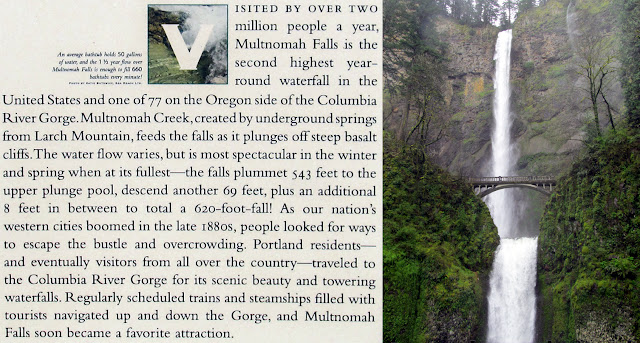 "... Observations of waterfalls over Columbia River basalt have shown that falls often occur where flows are flat lying or dipping upstream. This condition allows blocks produced by vertical joints to remain stable until support is withdrawn by erosion of softer interflow material at the base of individual flows. The rate of erosion of interflow areas probably largely controls the rate of retreat of the falls. The amphitheater-shaped valleys common to many of the falls within the Gorge are due to the freeze-thaw action of water from the splash mist that has penetrated the joints. ..." [Norman and Roloff, 2004]

Latourell Falls were nearly as impressive as Multnomah, and benefited from not having the trappings of tourism that's part of the Multnomah stop. Though not as high and not as layered, Latourell was pristine & photogenic, with lichen giving an entablature formation a splash of color, and the columns on the bottom undercut layer looking like an arrangement of cathedral organ pipes. The 76m plunge is the most unfettered of all high waterfalls in the gorge region, as others tend to impact (horsetail) at least slightly against the vertical rockface. It's one of those beauties where it's hard to take a bad picture.


I'm not really good with coda's, but I can say that there is one dominant feeling I came away with from this trip = I want to go again...but somewhere new. And as gas prices continue their northward march, the western US states are looking even more preferable than they were beforehand. I certainly got to experience a huge slice of basalt geology, which was quite the contrast from the granite geology of my home base. I think the next time calls for a true desert locale, something not really available in my home province (Osoyoos doesn't count). Ahh the possibilities...I just wish they wouldn't butt up against the lack of time & money.

When and if you return to the gorge, I strongly recommend the old scenic highway. Coming from Portland, get off at Troutdale, then follow the Sandy River upstream for a while before turning back north toward the gorge. It's not as well known or as obvious as I-5 or the adjacent section of the Historic Highway, and some of the views are jaw-dropping. See Dana's post here: http://entequilaesverdad.blogspot.com/2011/03/oregon-geology-parte-tenth-crown-point.html
Also, see the map on pages 6&7 of this guide (page 4 of the 1.6 Mb PDF)- intended for bicycles, but accurate for cars too.
http://www.skamania.com/pdf/biking-guide.pdf

I actually stopped off at Chanticleer Point on the morning after Day 3, and took similar photos of the Women's Forum that Dana has. (there was an earthcache setup there - http://www.geocaching.com/seek/log.aspx?LUID=e2b7cdee-d2c4-4b5c-a156-fbda1e400c23)

Searching for the Ultimate Dating Site? Create an account and find your perfect match.