Accretionary Wedge #34: That is Weird 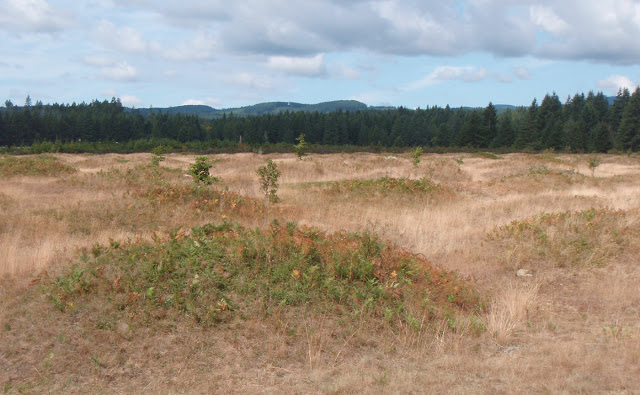 This months Accretionary Wedge is being hosted by Dana Hunter over at En Tequila Es Verdad, which Google translates as "In Tequila is Truth" (don't ask this teetotaler what that means). The theme is any geology which the blogger considers weird. My limited experience means many geological phenomena I observe are initially head-scratchers, but subsequent investigation usually becomes a learning experience, and later I can't imagine a time before understanding the phenomenon. 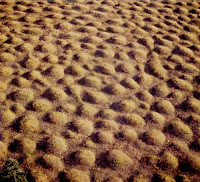 In choosing what to post about that's weird, a memory popped into my head that quickly settled the issue. What better to include in this carnival on weird geology than a landform that has no unifying theory on its origin, but rather a bunch of hypotheses? What I speak of is the Mima Mounds, located 20km south of Olympia, Washington. This set of mounds is the only I have visited, but variations of Mima Mounds exist elsewhere: Lake District in Oregon, Northern China, and in the Western Sahara, to name a few. The geographic and climatic spread means that certain groups of the mounds have more explanation for their genesis, ex. the Oregon-based mounds have a more definitive volcanic morphology. But the mounds in Washington I'm focusing on continue to baffle geologists. Hypotheses about their origin range from animal construction - seismicity - periglacial kettle topography.

The mounds outside Olympia measure around 5-8 feet in height, and 12-20 feet in rough diameter. They are similar to the prairie-based pimple mounds of the southern Midwest states, and their might be connections based on pedological similarities. If you are a keen geologist, each explanation will stir up good probing questions, many of which are yet to be answered fully. For instance, the gopher proposal is criticized for lack of zoological evidence at the Washington Mima Mounds, plus their density raises questions of competition for food resources if a multitude of gophers built them, or necessity if many mounds were built by a few gophers. The earthquake hypothesis is a compelling one, and more research into the physics of the mounds' granular material should be revealing once it comes forth.

Most current research into the Mima Mound phenomena is concentrated around the periglacial hypothesis: Kettle & Kame topographical depressions (sun cups) were filled with glacial sediment during rapid retreat at the end of the last Ice Age. Repeated outburst floods as the glacial front retreated & disintegrated provided sediment that filled the depressions. Those depressions experienced subsequent freeze-thaw heave; hence they are arguably akin to small-scale pingo formations. However, glacial conditions are not apparent at several places where the mounds exist, even when examining deep-time paleogeography. Also of note is that not all mound formations have the same soil/sediment profile, even within the same mound group. Some of my own quick observations at the Mima Mounds Natural Area include how the mounds are more diversely vegetated, some mounds have a deflated appearance, and that exposures of the substrate revealed a primarily gravelly/pebbly mixture that reminded me of glacial diamicton.
Geology that can be considered 'weird' is refreshing to have around. A lot of it is nature's abstract art. I considered doing the tessellated pavement structure of Eaglehawk Neck in Tasmania, but that has a thorough explanation, and honestly, when thinking of strange geological formations, one's that are unexplained and/or under debate strike my fancy more. Finding out that not everything in earth science is yet definitive gives me a chance, albeit small, to be a future pioneer.

Fascinating. Thanks for posting this.

I already knew that the mothers had a very strong maternal instinct as i was told that at Yellowstone when i was there last year. Its terrible that some species do abandon their young if humans are scented, Perceptual Wedge Hypothesis