Being a poor undergraduate student, I tend to savagely bite my pocketbook whenever I plunk down for some new textbooks or access to academic papers. Amazon has become a great source for affordable books, but when it comes to papers, the search for freely available ones is like a search for lost treasure. Whenever I find one, its like finding the pot of gold at the end of the rainbow. More often these days I am finding free papers, usually from professor recommendations, blogs, and branching out from the Wikipedia hub. I'm not a complete cheapskate – I purchased Anne Jefferson's paper on Hydrology & Topography of Oregon's High Cascades, and reading it actually led me to visit the primary site (Pacific Crest trail to Belknap Crater) when I was last in Oregon.

My geomorphology professor happened to be a glaciologist, who tends to drop off the face of the planet during his ventures to Greenland & Antarctica (he's down in the deepest south now during the window). He sent me word of some freely available papers he authored, and I took a look at his latest paper, dealing with the advance or retreat of glacier tongues in the Juneau icefield during the late Holocene (CE years), and how the chronology of those movements challenge the term "Little Ice Age". I'm wide-eyed when reading these and actually understanding most of what is said (though details of mass spectrometry still confuse me - I need access to one to play around with).

Radiocarbon and dendrochronological dating of glacially overridden stumps and detrital wood indicates that two outlet glaciers of the Juneau Icefield advanced shortly before the ‘Little Ice Age’. Tulsequah Glacier advanced to within 2.4 km of its all-time Holocene limit between ad 865 and ad 940. Llewellyn Glacier, one of the largest glaciers in British Columbia, advanced sometime between ad 300 and ad 500, and reached to within 400 m of its Holocene limit between ad 1035 and ad 1210, well before the climactic, ‘classical’ ‘Little Ice Age’ advances of the past several centuries. Our data show that some glaciers in western North America were extensive and expanding at times when alpine glaciers have, in the past, been assumed to be restricted. The evidence raises questions about how to define the time of the beginning of the ‘Little Ice Age’ and, perhaps more importantly, about the utility of the term.

As you can read in the above abstract, the authors postulate that the Little Ice Age period, roughly 1600-1900 CE, is too vaguely defined to be properly used in geologic circles considering the variations in glacial extent in the Western Hemisphere. Taking a look at historical conditions of both the Llewellyn & Tulsequah glaciers, they find their furthest extents occur during the established Medieval Warm period, roughly 950–1250 CE.


Moraines and ice-dammed lakes are utilized to define the geomorphology of the glacially-carved valleys. Dendrochronology and radiocarbon dating of 14Carbon isotope was heavily used (and I do mean heavily), for detrital wood caught in morainal till and diamicton layers. Death of subalpine fir (Abies lasiocarpa) was used to date advances of glacial tongues, bulldozing vegetation along their course.


The Landsat image below highlights a portion of the study area, showing Tulsequah glacier and how exposed land is confined to a constricted valley that is essentially the glacier's foreland. The Tulsequah river flows into the Taku river, which then flows into the sea around the Alaskan panhandle fjords. The 'Rock Ridge' is a till-covered roche moutonnée, from which many samples of stumps were used for 14Carbon dating. This is all viewable on Google Earth; check 58° 38.00'N 133° 33.00'W (Tulsequah & Taku confluence) and move in a NNW direction up valley. The gradient of the valley is a bit below 1%. 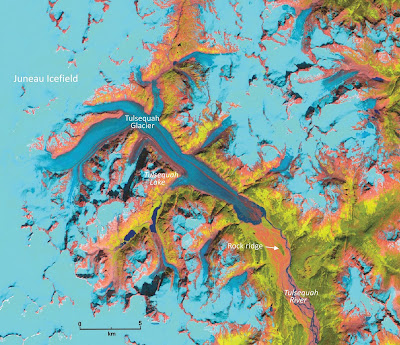 The general stratigraphy involves a mixture of glaciolacustrine sand & gravel overlain by diamicton and glacial till, which pressed into fractures of the lower lacustrine layer, forming clastic dykes. A thin veneer of modern glaciofluvial gravel-grading-to-silt is the icing on the cake in some parts of the river valley.
I generally get 3 things out of a peer-reviewed paper:
Below are some links about Juneau icefield research, and the paper itself @ Sage journals. Sorry for the pay site, but I couldn't clarify with the author before he left for Antarctica if I could provide a link to a free copy.

Do you have access to journals through your college library? If you don't have access to a particular journal, you might be able to request it through interlibrary loan.

It's really a shame that there are not more free science journals.

Actually I just spoke with a professor today, and he mentioned that our university recently paid big bucks for ScienceDirect. Looks like I'll be set for a long while.

Excellent. In my opinion, ScienceDirect is one of the best.

A group of my professors just got back from Antarctica... Over a 2 month period I think they had internet access twice - at the beginning and end of the trip!

While I'm impressed that you thought my paper was worth paying for, you should never ever do that unless you are absolutely desperate. First, as Evelyn suggested, check your university library (look in the catalog by journal name). Then try googling the authors' websites and see if they post their papers (like mine was). Finally, before purchasing, send the author an email and just request a copy. Most of the time we are thrilled that people are actually interested in reading our stuff.

By the way, I'm really enjoying the blog. Keep up the good work.