On the Geology & Topography of Herefs

Last summer my experience at university took an interesting turn, as I was recommended to a couple of professors to be taken on as a research assistant. The work primarily involves GIS mapping with ArcGIS. I jumped at the opportunity to get involved in academic research in the realm of geography, and the flexibility it offered fit around my existing work and studies quite well. I'm a bit of a workaholic, and not a procrastinator (does that word have an antonym?), and I think that came as a surprise to my new bosses.

One of my bosses doctoral research involves various counties of England and their historical land ownership issues. The work that is thrown my way generally involves spatial analysis of locations and distances within these counties, and I've relished learning the specific geography of each. So far focus has been on the Southwest, but the most recent county I've examined is Herefordshire in the west midlands. I use Google Earth to gather location elevation data, and when perusing the county, I got a sense of its topography and land use. But that's not where a geonut would stop inquiring; we need to know why the topography is the way it is.

Many people (and by that I mean my narrow assumption) when they think of the countryside in England picture rolling green hills and a preponderance of farm plots, broken up occasionally by a Sanford Gloucestershire-type town. Herefordshire turned out to be pretty much that way, with a few breaks in the stereotype. 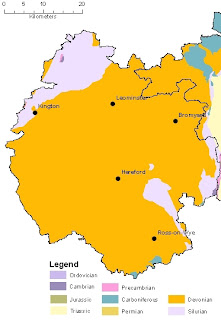 The Bedrock geology of Hereford is dominated by Devonian (416-360 Ma) Old Red Sandstone, a huge sedimentary rock series formed from the erosion & deposition of the ancient Caledonian mountains, which formed when Laurentia (North America) and Avalonia (British Isles + Northeast USA) and Baltica (Scandinavia + Eastern Europe) all collided together, forcing up an imposing mountain range. Over millions of years the Caledonians eroded, and deposited in basins at shoreline margins and across broad tropical plains (England was around the equator for much of the Paleozoic) was the eventual mudstone/sandstone material that would lithify into the ORS. Looking at the figure to the right, a lesser portion of Herefs bedrock is Silurian (444 - 416 Ma) limestones, sandstones and shales, mostly in the northwest & southeast. This Silurian system of sedimentary facies contains the greatest abundance of fossils in Herefs, with brachiopods, trilobites, and the more elusive graptolites. If one were to dissect the underlying strata, one would find an interweave of shales, conglomerates, mudstones, etc....basically a sedimentary rockcake, albeit slanted, slightly deformed, and with a few coal chips.


There are some unique igneous and metamorphic formations that protrude the landscape. Herefs portion of the Malvern Hills to the southeast are composed of Cambrian quartzite, and so are a few low-relief hills just outside Brampton Bryan, though it would be hard to view them unfettered due to fence-fence agricultural development. Quaternary glacial activity during the Pleistocene brought the bulldozing force of glaciers down to the county, frequently smoothing out and rounding the landscape during advances & retreats, and thus till mantles a fair number of the hills and broad uplands. Glacial erratics were left behind on top of some taller hill groups such as Hanter Hill and Stanner Rocks, both plutons. Chronological evidence of the furthest extent of glacial tongues ends 20 Ka, spreading into what is now the courses of the River's Lugg and Wye.
When I was perusing the southern half of Herefordshire, the most atypical feature that popped out is the River Wye gorge, and the community of Symond's Yat nestled around a bend in it. Here the river cuts a defile in Carboniferous limestone, exposing beautiful cliff faces, dissolved caverns that yielded fossils of deer, mammoth, and rhino analogues. All those features made the area appealing for tourism. Furthermore, the defile's profile reminded me of the Delaware Water Gap in the northeast US, mainly because the first geoposter I ever made had a section about the water gap. They have different geomorphological origins, but there is a resemblance in terms of limestone structure and general topography.


It would be a disservice to not mention the characteristics of Herefordshire's soil, which is given a red coloration by weathered Old Red Sandstone particles, making the pedon profile easily identifiable. The soil itself is primarily clay and/or marl. Five minutes on Google Earth in the county shows its multitude of farmland, and every type of use that the English are known for is found in Herefs (cattle, sheep, horse, hops, wheat, barley, turnips, fruit). Pear and Apple orchards dominate cultivated land in the county, ranking only second next to Devon in output; not surprising given Devon's larger area plus its portion of ORS. Man's love of drink means that all that fruit inevitably led to some local brews of cider becoming popular. 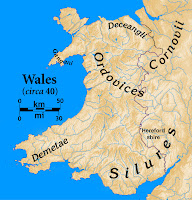 Herefordshire is definitive English countryside, and was part of the stomping grounds for the founding minds of geology. Indeed any keen geologist will recognize the significance of the old British tribes Silures & Ordovices and their proximity to the West midlands. Any input from locals of the region is particularly welcome. Next I might look into Devon, as it was the first county I did in-depth spatial analysis for, plus I have enjoyed a few of Dame Agatha Christie's novels set within it.
Additional Info: