Looking through the archives: Melbourne's climate

The climate of Melbourne, Victoria, Australia is one of great variation relative to the rest of the continent, but still moderate as oceanic effects and broad relief limit extremes, especially in terms of freezing temperatures and excessive rainfall. The city is located at the south-central side of the state of Victoria, which is the southeast corner of Australia. With a Latitude/Longitude of 37.5°S 145.0°E, Melbourne falls within what is technically considered the mid-latitude region. In terms of global circulation patterns, the city is affected by not only mid-latitude westerlies, which brings air across the west of the continent to the city, but also by the subtropical High and the Antarctic circumpolar vortex. The subtropical High normally resides in New South Wales for most of a typical year, but during the southern hemisphere summer the ITCZ (Intertropical Convergence Zone) descends into northern Australia, thus pushing the subtropical High south into Victoria and Melbourne. These seasonally changing patterns make Melbourne a diverse region in terms of weather, and fosters extreme events such as bushfires & droughts that are amplified by El Niño southern oscillations.

Melbourne at a Glance 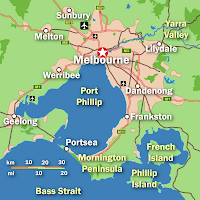 Melbourne lies quite flat on the horizon. A coastal city of 4 million with a secluded port as its access to the Indian Ocean (via Bass Strait), Melbourne is at the confluence of two major rivers that flow into Port Philip (Yarra and Maribyrnong). Geologically, Melbourne is mostly underlain by Silurian marine sediments, and modern alluvium from Yarra. The marine sediments were uplifted from the shallow Bass Strait. This highlights how low the general relief of southern Victoria is. With a sea level decrease of just 70m, a land bridge would form between the city and the island of Tasmania.
In terms of precipitation, this low relief makes Melbourne susceptible to flash flooding during more intense showers/thunderstorms in both La Niña and spring seasons. Poor drainage and infiltration through city streets, combined with a low greenspace ratio, exacerbate flash floods in the city.


Temperature & Precipitation Trends
With a Köppen climate classification of Maritime temperate (Cfb), Melbourne's general climatic trends are moderated by oceanic influences to the south from the Indian Ocean (Southern Ocean influences in the winter) and the mid-latitude location. Thus temperatures ideally never hit extremes in terms of highs & lows relative to continental and high-altitude climates.
The temperatures highlighted in the above figure shows a warm moderate climate with average highs ranging between 15-27°C, and average lows ranging between 7-17°C, both depending on season. Temperature extremes do occur in the city, mostly in terms of record summer highs stretching into the high 30's-40°C+ territory. Refer to Table 2 in the appendix for mean temperature values for Melbourne circa 1981-2010.
Precipitation in Melbourne is quite evenly spread out throughout the year, with a minor high in spring months and a low in summer months. Summer rains are mostly sporadic, resulting in thunderstorms/ heavy rainfall events in short bursts of time that essentially break up hot dry spells that have lasted a few weeks. These dry spells promote drought conditions, and coupled with high temperatures, intensify bushfires in the state of Victoria, with concentrations blazing just outside Melbourne city limits. Annual precipitation totals range from 600-700mm on average, with some years receiving decreased precipitation that would classify Melbourne as semi-arid, and others receiving increased precipitation that would make Melbourne dry-summer subtropical. Refer to Table 3 in the appendix for mean precipitation values for Melbourne circa 1981-2010.
In terms of sunshine hours, Melbourne receives on average 6.3 hours of sunlight per day, which totals annually to approximately 2300 hours. So even though Melbourne is known for variable weather, it stills maintains clear skies for most of the year.
Seasonal Trends
Summer (December – March):
Temperatures → Highs range from 25-40°C, with extremes into 40+°. Relative humidity values are the lowest as warming of the ground (QG) and warming of the air (QH) is high and thus air is able to hold more moisture. This results in typical dry spells that can last 10-20 days on average.

Air flow in Melbourne's summer is typified by quick changes between the dominance of either hot inland breezes from the north, part of the outflow from the subtropical High that occupies southeast Australia in the summer months, or cool sea breezes from the Indian Ocean to the south. Persistent blocking Highs settle into southern Australia as the ITCZ settles into the center/north of the continent.

Temperatures → Highs range from 15-25°C, with rare extremes into 30+°. Winds decrease to lowest yearly speeds, and thus fog formation is typical, especially later in the season as nighttime temperatures drop below single digits. Frost formation is possible in June.

Temperatures → Highs range from 10-17°C. Lows range from 5-12°C. Strongest winds of the year as frontal activity is quick and followed by brief clear conditions. Frosts are more frequent, but usually there are more frost-free days.

Precipitation → Relatively same as Autumn (45-50mm per month). Precipitation spreads out, thus greatest cloud cover for the year as cold & warm fronts cycle into and out of the city.

Circumpolar vortex to the south is strongest, and thus frontal activity is frequent. Anticyclones follow on the heels of depressions, giving periods of fair weather between passages of low pressure.

Temperatures → Highs range from 15-30°C, with some reaching into 30+°. Lows range from 8-15°C. Warm winds from descending subtropical High start making temperatures warmer in late Spring. Diurnal contrasts are greatest for the year.

Precipitation → Highest of the year (55-65mm per month). Precipitation becoming more sporadic and more intense, as frontal systems are frequent but more disjointed in space & time compared to winter.

Persistent Highs off the southern coast strengthen late in Spring, blocking depressions from making an impact on Melbourne, as highlighted in the November 2010 synoptic map. However, spacing in isobars is still small, making for gail-force winds and intense frontal activity.


Melbourne and the El Niño Southern Oscillation
The El Niño climate pattern that periodically affects the entire Pacific Ocean has a particular effect upon the Australian continent and by inclusion Melbourne. During southern hemisphere summers, high air surface pressure dominates in the west Pacific as upper air convergence leads to subsidence and divergence upon the surface. This conveyor effect deters any uplift and essentially dries out the continent, leading to reduced precipitation. Radiation will evaporate water (QE), but being the driest continent on Earth, there is little to evaporate inside Australian shorelines. Thus increased heating of the air (QH) will allow the atmosphere to hold even more moisture apart from what little there is in the first place.
Bushfire Disasters:
Australia deals every year with bushfires, and Victoria usually gets the brunt of them during the summer, with El Niño summers exacerbating fire conditions. The natural vegetation of the interior woodlands just north of Melbourne germinates with fire, meaning that after the season ends and the fires subside, the vegetation/fuel is recycled and ready to go for next year. The problem with devastation to life and property exists because human development, be it agricultural/industrial/residential, encroaches onto land that is part of the natural fire regime. A fire starts via lightning or accidental/deliberate human activity, and is hard to control as flying embers combined with an ecoregion of tinder-dry vegetation fosters the quick and deadly growth of bushfires. The main prevention mechanism employed by Victorian firefighters is to conduct controlled burns of fuel material, sometimes adjacent to highways where an existing boundary (the road) is present. During El Niño summers, these efforts account for minimal reduction in fire propagation, as hot winds and tinder-dry conditions allow bushfires to consume fuel material throughout the state.
Table 1 – Select statistics on destructive Victorian bushfires (2001-2010)
Melbourne caught out by climate change
The Australian Bureau of Meteorology has noticed an increasing trend in annual temperatures in Melbourne, with the greatest change in daytime highs during summer months. Temperature extremes of 42-46°C set record highs in 2009, and the trend is expected to continue with likely greater highs being set for all seasons in the next 30 years. Precipitation is becoming more sporadic in Melbourne, with the seasonal avg. totals being fulfilled by less and less days, involving more intense rainfall. Desertification pushes outward of Australia's vast arid interior landscape, threatening the margins of subtropical and temperate woodlands that hug the coasts. Desertification has increased soil erosion, pushing cattle-ranching and wheat agriculture out of already marginal lands. Indeed, drought has pushed Australians to become water conservationists in their daily lives, both to manage water resource demands for agriculture/industries (irrigation) and their personal health/livelihood (hygiene and gardening).
Conclusion
Melbourne is one of the most variable locations in Australia's climate regime, and is becoming even more so due to the impacts of climate change, drought, and stronger El Niño effects. Environmental groups and local/state governments are looking thoroughly into more sustainable ways of managing city development, energy sources, water resources, and protected agricultural land. Human encroachment and straining of natural resources puts additional pressure on a country with a high population growth rate plus high immigration. Climate change may be a gradual phenomena, but Australia, and Melbourne in particular, will feel the brunt of it more immediately and fiercely as already limited water resources feel the pinch on the driest continent on Earth.
Appendix
Table 2 – Temperature statistics for Melbourne (1981-2010, minus Nov & Dec 2010)
Table 3 – Precipitation statistics for Melbourne (1981-2010, minus Nov & Dec 2010)
Additional Info: