A glance at Saskatchewan Potash mining 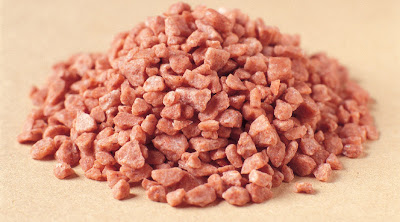 Saskatchewan might not at first seem like a province that can build itself up as a preeminent world-class supplier of any resource. The population is only 1 million, spread out over a large area, and the climate has inhospitable extremes in the summer and winter. Yet Saskatchewan has built itself up as a leading supplier of a rare-earth salt called potash. Potash is essentially a water-soluble potassium-rich mineral that is often combined with chloride or carbonate, and it has settled in abundance underneath the sedimentary platform that defines the geology of Saskatchewan's prairie-lands. The industrial heart of the province has utilized this abundance to strike at rich in a world market where potash is an excellent & cost effective fertilizer for crops, and markets in India, China and Brazil have made it lucrative for the monopoly that Potash Corp. has created.


Why is Saskatchewan so rich in potash?

That question can be answered by looking at the historical geology of the province. During the Devonian period 390 million years ago, southern Saskatchewan was inundated by a restricted inland sea. The equator was also located close to the province, thus the conditions were ripe for evaporation of water in the ancient sea, and thus the leftover mineral content collected and formed what are called evaporite beds. These beds were subsequently covered by later horizontal sedimentary deposits. The capping layers were not too thick, on the order of a thousand meters, thus drilling and mining access to the potash using modern techniques is cost & technically feasible.
Types and uses of Potash 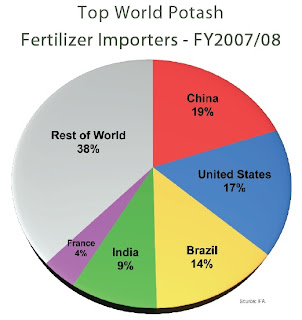 Their operational goals are similar to other smaller potash company operation goals, and they include providing good ROI for shareholders, cornering the fertilizer market abroad, building relationships with local communities where mines/processing plants are located, furthering business contacts with talent-driven peripheral organizations, and protecting & remediating the environment where operations are conducted. It remains to be seen whether specific, quantifiable measures to achieve some of these long term goals will ever come about, especially in regards to environmental concerns and community involvement.

Balancing all the elements in the potash industry will be a challenge for all the major stakeholders, but the future of the industry is looking bright in terms of integrating participants in a thoughtful manner, along with taking a deeper look at environmental issues. The only missing piece of the puzzle is consideration for diversification: Saskatchewan has been stuck in a loop of relying on primary sector industries without looking towards other sectors. Investing primary sector gains in secondary or tertiary sector industries needs to be on the provincial agenda. Then and only then will a more stable growth in population occur, and not a transitive one.