I rarely get to have discussion with human geography students, but the natural hazards class I recently completed had a good spread of the physical geeks with the human geeks. One human friend mentioned how she lives in a neighborhood on the edge of a broad alluvial fan, and that her parents have little clue as to the potential dangers of living on such a precarious foundation protected only by modest dikes, which I might add have had increasingly shrinking freeboard values for the past two decades. The deflecting reason they gave her is that "developers would not have built here if it wasn't safe". 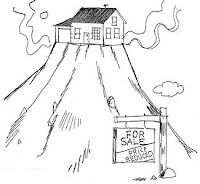 Oh no, they would. Developers hedge their bets, and most in our regional district tend to downplay the importance of geophysical reports. Developers will push through proposals with hard cash to get the required zoning, especially if the 'view' and location is something that will bring them big bucks. This is not to say that they will cut corners wherever possible, as most of the time construction is top-notch, corresponding to strict standards for quake-proofing and packing down the sediment if the foundation happens to be laid upon Holocene alluvium.

Where is this post leading? Well, in my humble opinion prospective home owners have to take on some proactive responsibility themselves. Common sense dictates that the buyer beware, and there is no excuse for an educated westerner who does have the rights and the access to geophysical information to not take some time and look at it. Where I live in beautiful British Columbia, our own provincial division of the Canadian geological survey has done some excellent work on investigating factors that determine how damaging certain natural hazards are in certain areas. Below you'll notice fragments of a poster that outlines the traffic-light approach to categorizing hazards:
Looking at this one source of credible information already alleviates a lot of concerns a potential home owner would have, especially in our tectonically active region. Sure we haven't had a big one in living memory, but that doesn't mean we are out of any proverbial woods. On the contrary, the lack of moderate quake activity off the coast of Vancouver Island has led geophysicists to investigate and conclude that the Juan de Fuca plate & North America plate are locked at the shallow subduction contact, and tension is building to an inevitable unbuckling. Whether that results in one huge snap of a megathrust akin to the 1700 Cascadia quake, or a series of smaller unbuckling motions is yet to be seen.

I was asked if I chose where I live because it is among the safest spots in the region. I reside on the glacial uplands, on the crest of a street with a gentle slope. Alas, as a student with a limited budget and only part-time jobs, I cannot claim that I was so smart to have chosen such a safe spot. It's pure coincidence, I chose it because I could afford the rent. But I have dodged a bullet, so to speak, by digging for this knowledge and taking it to mind before I do make my first home purchase years from now. I've already compiled a short list of personal rules for where a home should be, to which additions will slowly be added:
I know a few of these are not economically feasible, but I've tried to arrange them in what I consider their order of importance, and the first several are free provided some time and effort and some light education. The GPR might not be an option, but if buying a $seven figure$ home, it's worth it for peace of mind. Above all else, look at the hazard history of the area you're moving into.

I'm not touching on atmospheric hazards, but they should be looked into as well. They're kind of a big deal too.

Very interesting read, and particularly relevant as I am currently looking to buy a home. Curious, what are your thoughts on Tsawwassen - seems to score well on liquefaction, slopes (parts) and flooding? Not sure what sediments are lurking below it though.. any thoughts?

I've been debating, and attempting to research the exact same issue. We will be relocating to Vancouver/Great Vancouver this spring, from Alberta. I have narrowed it down to the West side of Abbotsford. as it seems we can avoid landslides, tsunamis, fires, liquefaction, flooding, and "the big" one, lol. What are your thoughts on the area?

Luckily I have friends who live in both Tsawwassen and Abbotsford, so I can draw on their experiences.

The natural hazard risk of both places is accurately portrayed by the diagrams. I would just avoid beachfront property in Tsawwassen. Abbotsford does experience an occassional earth flow onto a rural road, but thats been simply a matter of geotechnical repair. The expected megathrust will likely cause more damage trending from west - east due to the dipping angle of the plate off the coast of Vancouver island.

In regards to the socio-economics: Tsawwassen is fairly affluent, expensive, but considered out of the way of Vancouver activities. Kind of an old-folks settling down area.
Abbotsford is even further out of the way from Vancouver, but has developed into its own separate center in many regards. The big problem with Abbotsford is crime, both petty & gang crime, the latter of which won't effect most rational residents, but the former of which might cost you money if your property is vandalized. However, Abbotsford is quite affordable.

I thought I was the only person who thought of 'safe places' to have my future home, geologically speaking. I live on the Gulf of Mexico in the USA, specifically Biloxi-Gulfport, Mississippi and here we really have mainly the hurricanes and flooding due to those. We have no earthquakes, no blizzards (we hardly have 'snow'-every 11 years we might get some sleet), no mountain/landslide hazards,no droughts, no volcanos, no wildfires, and although the Mississippi River is only 70 miles away from us, we honestly have no real flooding problems (outside hurricane flooding). Our most recent major disaster was Hurricane Katrina in 2005 (before that our major disaster was Hurricane Camille in 1969) and although she was very bad, we had just built a new home 18 miles from the beach (of Gulf of Mexico) and we had damage to our chimney in the area of less than $100.00. We have since sold the area and we now rent a place above where we lived. We are looking to build now and after much thought on where we should go, looking all over the US, I've concluded that here might be the best place, geologically speaking. Thank you for your list of impotant hazards to look for when deciding where to buy and build your home. I am putting this with my existing list. Good Luck on your search as well. Before reading your post, I had no idea that part of Canada was so worrisome (geologically speaking). Again, fair well with your search (and your degree!).