This is a follow-up to the field photos I posted a month ago, and my best explanation of their origins and processes.
First is a landform located in a gravel quarry in Squamish, BC (49° 43.899'N 123° 06.250'W). Access is via Sea-Sky highway #99. Take a right onto Mamquam Rd. near the Canadian Tire, and travel for 2km up to the quarry entrance, which will be on your left. The geomorphology of what you see below was created when the land in the area was much closer to sea level during the Pleistocene epoch. The environment of deposition was transitional, specifically a delta, represented by visible topsets & foresets. Bottomsets are presumably there, but have not been exposed by the quarrying. Since the region experienced glaciation during the Pleistocene, isostatic depression was the primary force for lowering the area to near sea level, and Holocene rebound has taken it up to its current 100m elevation. Evidence of glaciation is apparent from the mantle of glacial till, which overrode the underlying sedimentary structure during a later advance. 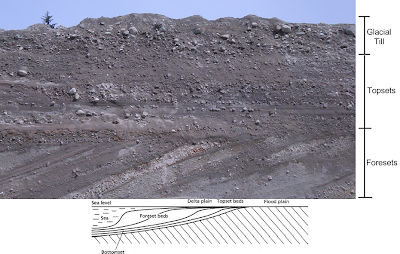 Second is an up-close shot of a granodiorite rockface that includes a granulite xenolith shaped somewhat like a tooth (49° 20.025'N 123° 07.124'W). The rockface is tremendously chemically weathered, turning it into saprolite. This chemical weathering mechanism is not indicative of the current mid-latitude temperate climate of BC, but is indicative of when BC was placed in a more equatorial latitude in its late Paleozoic-early Mesozoic paleogeography. The granodiorite is typical of so much of southwest BC, as it is a plutonic extension of the Coast Range batholith that encompasses the region, and by subsequent erosion has been thoroughly exposed. During its subduction-driven intrusion, the batholiths extensions baked overlying sedimentary & igneous units, and metamorphosed granulite 'polka-dots' became inclusions within much of the granodiorite seen at the surface. Touring Greater Vancouver, one can spot many instances of aggregate that uses the granodiorite w/ granulite xenoliths manufactured for construction and landscaping.

Access to this rockface: Follow Trans-Canada highway #1 west in North Vancouver. Take the Taylor Way exit and make a left turn onto Taylor Way. Head south for nearly a kilometer, and make a left onto Keith Rd. Follow Keith Rd all the way until you pass under the highway, then park and walk down a relatively steep trail to the Capilano riverside. 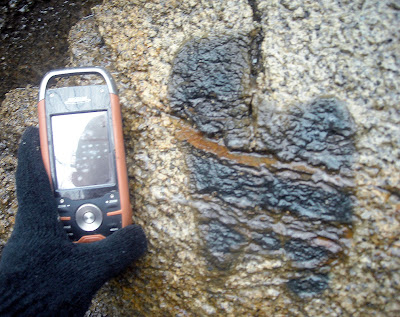 A couple more field photos will be posted soon, and this time explanations will be included forthwith. And just a small aside, a small rant: Anyone putting up paleogeographic maps on the web please, for the love of god, include major demarcations of latitude (equator, 30°, 60°, poles). It makes a world of difference in deducing paleoclimates.